Born in Appalachian Mountains of Alabama in 1946; he spent the first 21 years of his life in the State of Alabama. In 1968, he entered the United States Navy as an Officer. He was a UDT Officer for two years and served 19 months in charge of a Swift Boat in Vietnam. He then went through Flight Training and served 4 tours flying the A-6 Intruder off the USS Enterprise over Vietnam. He left Active Duty in 1977 and was admitted to the California Bar that year, having attended Law School at the University of San Diego in the evening. He continued flying in the Naval Air Reserve until 1997, when he retired.

He holds a B.S. in Microbiology, a M.A. in International Relations, a M.A. in Theology, a Juris Doctorate and a post-doctoral degree (LL.M.) in Criminal Law.
He spent over 25 years practicing Criminal Law as Public Defender and a District Attorney, specializing in Gangs. He is retired from the County of San Diego and for the past 14 years has done court-appointed trial work in Death Penalty cases.

He has been married to the former Sally Gale Mann of San Diego since 1986. She is a retired Deputy District Attorney for San Diego County since 2012. They have been members of St. Luke since 1989. They have two adult children; Dalton, a 2010 graduate of Loyola New Orleans and Amy, a 2013 Honors Graduate of UCSB. They were both Baptized at St. Luke.

His Jesuit upbringing and Silent Exercises, as well as many years as a Confirmation Catechist, encouraged him to discern service as a Deacon and he was ordained in 2011. He hopes to emulate Christ the Servant in reaching out to all; especially the marginalized. 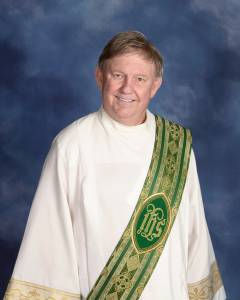