I was born in San Diego at Mercy Hospital. My Mom was born here in 1920 and my Dad’s family moved here in the early 1900s. The McColls are in the book of San Diego’s oldest families. I come from a long line of medical professionals. In the late 1800s, my relatives Dr. Marjory Potter and her husband, Dr. Will Potter, started this line. We also have a Catholic priest and several protestant ministers in our family.

My father was a dentist and his two uncles were the Dr. McColl’s who moved to San Diego. I have a cousin who was an orthopedic surgeon and another who was a general surgeon. My Mother’s three brothers were the Dr. Maguires who practiced in San Diego for years. I am the fifth son of my parents and also have a younger sister.

I attended Blessed Sacrament Elementary School and St. Augustine High School. From there, I attended San Diego State University. As a tiny child of two or three years, I could play the piano by ear and gave concerts to our neighbors. Even the first and second grade nuns would stop their classes and have me play for the school.

When my parents sold our piano, they bought me a guitar and an instruction book by Mel Bay. I learned the guitar by myself and used to bring it to the old CYO youth group meetings at church. It was there where young Deacon Danny Griesgraber saw me playing the guitar and singing in the corner of the youth group hall and told me “out of the blue” I was to lead the Blessed Sacrament Folk Group when he would leave in the next couple of months. Having never played or sung in front of anyone in my life I of course said yes to Deacon Griesgraber and the rest is HISTORY…. Within three months my Blessed Sacrament Folk Group won the Diocesan Championship!!! We then went on to make an album which we called “Sonlight.” I decided to quit after about 9 years.

Within a year of “retirement” I received a call from Sister Joanne Nicgorski who was Director of Music for the Diocese of San Diego. My folk group had done a few workshops with her and Father Nick Reveles. We not only did the current folk group music but I loved harmonies so we added adult choir material to our repertoire. Sr. Joanne told me that a priest named Father Jerry O’Donnell was starting a new parish in some strange place called Rancho San Diego. She asked if I could help out for awhile until he found someone permanent. At that point, Fr. Jerry and I had never met although he knew of me through my brother, Fr. Scott McColl. Fr. Jerry and Sr. Joanne would come to hear me sing in a duo at night clubs and that was the beginning of a long, happy relationship.

In case you’re wondering,I inherited my singing talent from my Mom. She used to sing with big bands in San Diego in her youth. Mom also sang live commercials on the radio because they had not yet developed the recording and storing of radio ads. As a result, all of her work had to be done live in studio. To this day, I have several of her records which she made in the ‘30’s and ‘40’s!!

Currently, I continue to work in construction with my brother, Brian. I also have a lot in San Felipe where I love spending time with my three children Chris, Connor and Taylor. I recently published a children’s book called “The Golden Bird” based on a story I made up for my son Christopher when he was about 3 or 4 years of age. It was incredible going through the publishing process! There might be a sequel in the future, so keep watching! 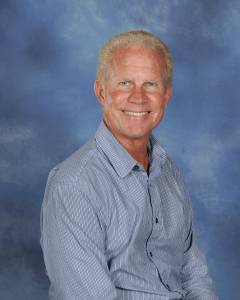