Centrality of the Mass

The Catholic Mass, A Brief Explanation1 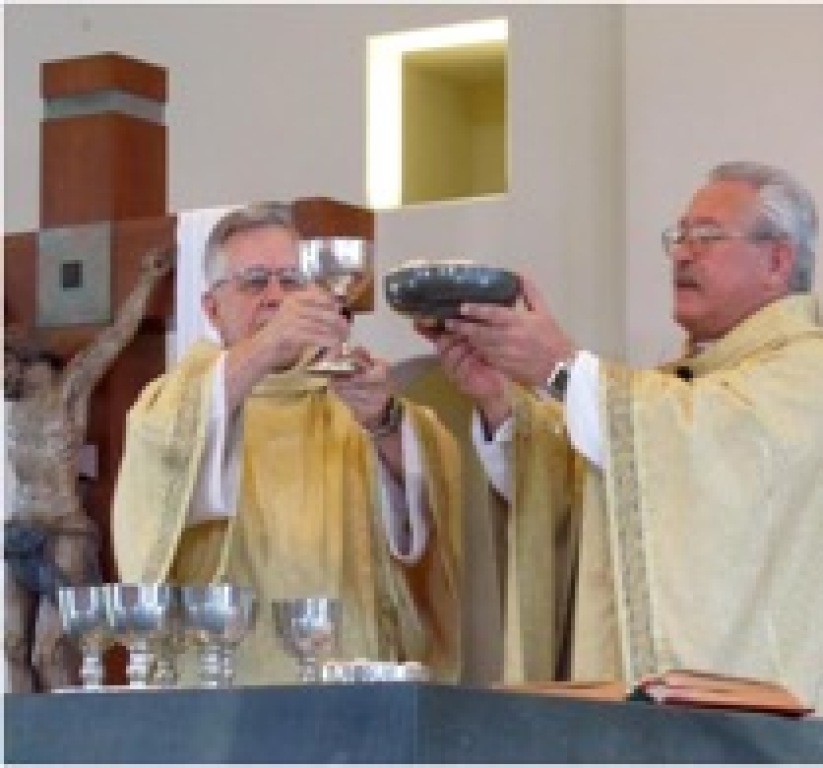 It’s in the Name

The Catholic Mass got its name from the last element of the Mass, the Sending. In Latin it’s "Ite misa est" often translated "Go, you are dismissed". It can be translated “Go, you are sent” but the word “misa”, the root word of  our word "mission", implies a more apt translation: “Go you are missioned.” The entire Mass works toward this "missioning" of the Body of Christ, the Church.2 It works up to our amen at communion time and then flows out into our being Eucharist in the mission fields of our day-to-day lives.

Center of the Christian Life

In the Mass we join the offering of the entirety of our lives to our Lord’s offering of himself and send them up to the Father as one offering.3 The Mass is the center of the active Christian
life. In it, we reaffirm our Baptism and recommit to carrying out the mission of the Church in the world.4 Catholics are, therefore, expected to participate in the Community celebration of the Mass each Sunday.5

The Mass may begin with an Opening Song which helps us gather and begins the process of our moving toward communion.6 The ministers enter in procession as we all enter into this sacred space and time.

Then we mark ourselves with the Trinitarian Sign of the Cross made by touching our forehead, our breast and our left then right shoulders with our right hand while saying the words which remind us of our baptism as disciples, "In the name of the Father, and of the Son, and of the Holy Spirit. Amen."7

Then there is the greeting which reminds us of the Lord’s promise to be with us whenever we gather in His name.8 The Presider says, "The Lord be with you" and the people respond, "And with your spirit."

Either the Sprinkling Rite, which reminds us of the cleansing effect of our Baptism, or a Penitential Rite, in which we ask forgiveness for our sins, follows.

During Sunday Mass we say or sing the Gloria, the song of the angels when the birth of Christ was announced to the shepherds.9

Finally we say our Opening Prayer, the Collect, which is chosen for the day, allowing us tobring to mind our intentions for that Mass. It gathers our prayers into one and raises them up to God as one prayer from the gathered community.

Liturgy of the Word

The first of two major movements in the Mass is the Liturgy of the Word. It comes from the Hebrew synagogue practice of reflecting on readings from the Law or the Prophets, singing sacred songs and praying together.

The Liturgy of the Word also contains a Responsorial Psalm, from the Book of Psalms, which is either sung or spoken, and a homily, which is designed to help us connect the Word of God with the lived experience of the Lord’s presence in our day-to-day lives.

On Sundays and Holy Days we show our oneness by praying the Creed together.

The Liturgy of the Word closes with the General Intercessions, our communal prayers for the Church, the World and those in need.

Liturgy of the Eucharist

The Liturgy of the Eucharist is the movement of the Mass through which the action of the Holy Spirit makes Our Lord's sacrifice of 2,000 years ago present to our day and time. It is similar to the Jewish Seder meal which makes God's saving power in the Exodus present to the Jewish people of today. When celebrated properly, it fulfills our Lord’s command, “Do this in remembrance of me.”

Preparation of the Altar

The bread and wine, which will become the sacramental presence of Our Lord, and the monetary collection, if there is one, are brought up from the people as a sign that we are giving back to God from the gifts we have received in our day-to-day lives. In ancient times people brought the gifts for the sacrifice from their homes. The monetary offering is used for the needs of the community and for carrying out the mission for which Christ established the Church.

The elements of the offering are placed on the altar by the Presider using a blessing prayer in the style of the Jewish Berakah11.

The Eucharistic Prayer, chosen for the day, including its Preface, is a prayer of thanksgiving and petition during which we ask God to make Jesus present in the bread and wine. We are invited to place our lives on the altar with him and offer them to the Father as one sacrifice, our lives joined with His.12 (Note that, in our Mass, we use the term Lord to refer both to Jesus and to the Father.)

The words of our Lord at the Last Supper are followed by an acclamation stating, with St. Paul, that as long as we do these things we proclaim the death of the Lord until he comes.14  And, finally, the people affirm the Eucharistic Prayer and make it their own with the Great Amen.

The Communion Rite begins with the Our Father recognizing that we are all brothers and sisters in Christ. Then we share the Kiss of Peace remembering Our Lord's call to make peace with our brother or sister before we approach the altar.15

Our altar call is the words, "Behold the Lamb of God. Behold him who takes away the sins of the world. Blessed are we who are called to the Supper of the Lamb." It begins our Communion Procession.

We are saying yes (amen) to being part of the Body of Christ because, as our Church teaches, it is in receiving that we are enrolled.16 We process back and refill our pews as the Church, the Body of Christ, is being built in order that it may be sent out on mission at the dismissal.

After a brief period of reflection on the gift of the Lord's presence, we bring the Communion Rite to a close with prayer.

The concluding rites include a period for community announcements.

The greeting, "The Lord be with you", is said again wishing that The Lord, who was present at this Eucharist, will remain with us as we go.

The Presider blesses the people and the Deacon17, or the Presider if there is no Deacon, dismisses them to go out and be the Body of Christ in the world of their day-to-day lives.

1 This explanation is of the Latin (Roman) Rite of the Catholic Church. There are several other rites, notably in the San Diego area, the Chaldean, Syriac & Maronite rites, whose rituals may differ somewhat.

2 The Documents of Vatican II, PO 5

5 The Sunday Mass may also be celebrated on a Saturday evening.

6 This singing that begins our act of coming into communion is first described by the 5th Century author Pseudo-Dionysius in Ecclesiastical Hierarchy 3.3.5.

10 The meaning of the Latin liturgia is public works like bridge building. Building a bridge between earth and heaven is the job of the priest and priestly people.

11 A prayer of praise and thanksgiving starting “Blessed are you O Lord our God, King of the universe…”.

17 The presider is a priest. The Deacon proclaims the Gospel, assists at the altar & instructs the people.